Forgive me my absence, dear vegans! I know it’s been a while, but as far as excuses go, how does travel and then a major debilitating injury work for you? I’ll take you back to the beginning… with some food stops along the way, of course.

At the end of June, we threw up our hands in despair at the Canberra winter and hopped on a plane to Vanuatu. We’d always thought about going, but had been hesitant because of the cruise ship tourism scene. It’s definitely not our style. But with flights from Australia so affordable and the scenery looking so amazing, we couldn’t resist. It certainly seemed that we were heading for paradise- but as a lengthy attempt at online research let us know, it seemed that Vanuatu is a paradise in every sense of the word- except for the vegan food sense.

But hey, when your room comes with its own beach, there’s not that much to complain about! We started out in Port Vila, where we stayed at Erakor Island Resort. We’re certainly not typical resort people, but tourism in Vanuatu is still built around passing cruise ships rather than lengthy stays. We weren’t sure how much we would enjoy a resort trip, but the choices are limited and as it turned out, we couldn’t possibly recommend Erakor Island highly enough. The people here totally made this place for us, they were all super friendly and we had a great time hanging out with them and learning a bit more about life in the villages around the island. One of the staff members was even super excited to discuss veganism with us- we didn’t think we would meet anyone who knew what ‘vegan’ meant, let alone someone who makes his own nut milks!

Importantly, the food here was also great. We hadn’t planned to spend much time eating on the island, and ended up there the first night because it was already dark when we’d arrived. But luckily for us, the hotel restaurant made an amazing vegan coconut curry. Less luckily, mood lighting (or rather, eating in almost total darkness) seems to be a big thing in Vanuatu so we couldn’t manage a photo. But we did go back in slightly better lighting for some awesome sesame hommus with fresh-baked damper rolls… … And of course, cocktails (it’s not a holiday without them! Or maybe that’s just my mother’s influence talking). On the mainland, we made a beeline for the Port Vila Mama’s market. This open air market is packed with women from all over Vanuatu selling their home-grown produce- 24 hours a day! It’s just as amazing as it sounds. All of this amazing produce made us wish that we had a kitchen so that we could cook with it all. It also made us realise that we could definitely live here and eat well. Even without the kitchen, we found ourselves returning day after day to stock up on snacks, from taro chips to the world’s juiciest, most delicious grapefruit. I don’t think I can ever go back to eating Australian grapefruit!

Between gorging ourselves on fruit, we managed to check out some of what Port Vila has to offer, like hiking to Mele Cascades… … hanging out with these guys… … and spending Chadmas (Chadwiko’s birthday, to the uninitiated) fulfilling two of his dreams. Zorbing (pretty fun, even if the ‘Zorb attendants’ do have way too much fun throwing buckets of freezing cold water in there with you)… … and taking a helicopter ride through the jungle (while whistling the Jurassic Park theme song, of course).

All of this action left us hungry for something more substantial than grapefruit. And so we found ourselves drawn to that old standby of the vegan traveller- cheeseless pizza. It’s usually a depressing prospect, but we actually found a couple of surprisingly good options. On the recommendation of our Mele Cascades hiking guide, we checked out a restaurant called Chill. We were a little reluctant when we arrived to find it packed with other travellers  and expats (and more so since they were all far better groomed than we were- but in that humidity, why bother?), but we settled in to a dark corner and ordered anyway. The cheeseless vegetarian pizza that emerged from the kitchen for me was a pleasant surprise- they’d added tofu and a generous amount of herbs to make up for the missing cheese. This was super fresh and really tasty. Chadwiko ordered a margherita pizza and declared it to be the best one he’d ever eaten (not a compliment he’d expected to give in Vanuatu!). Best of all, there was enough left over to lug back to our room for breakfast like the cheap backpackers-at-heart that we are (most likely to the displeasure of some other diners there). Between stops, we also found ourselves returning time and time again to Port Vila’s Nambawan Cafe. At first the free WiFi was a major drawcard, but we soon found that the drinks menu was the best around. Great juices and smoothies, and fresh coconuts as far as the eye could see! Their simple potato pizza also makes a great, quick vegan lunch. And with cafe located right on the Port Vila seawall, the view isn’t bad either.

From Port Vila, we headed north to Vanuatu’s largest island, Espiritu Santo. While Santo has some amazing sights, it’s less visited by tourists and is noticeably less developed than Port Vila. A quick drive through the island’s capital, Luganville, didn’t reveal a plethora of dining options so our fingers were tightly crossed that our hotel would provide us with a decent feed. If not, I had a week’s worth of Clif Bars taking up half of my backpack. Luckily for us, in addition to this awesome room (right in the ocean at high tide!), Oyster Island resort also kept us very well fed. With amazing taro and local sweet potato curries (my favourite), kumara chips, pizza, delicious freshly baked bread and even an island barbecue night featuring coconut milk-stewed taro and some great rice dishes, I didn’t even have to think about breaking into that Clif Bar stash.

Continuing in the tradition of serious mood lighting, I was only able to snap a photo of the aforementioned kumara chips- and of course, a Tusker beer. But less food photos means more room on my camera for some of Santo’s amazing scenery. We kept ourselves busy, from kayaking to the famous blue holes (deep natural pools with the craziest shades of blue I’ve ever seen- no Photoshop necessary) to swimming at the most perfect beach I’ve ever seen, to making friends with some of the locals, both human and non-human. Unfortunately, all good things come to an end, and it was here in Santo that I managed to injure myself and have to cut the trip short. While hiking in some dense jungle, having explored some pretty amazing caves, I slipped on a tree root submerged in deep mud and dislocated my left knee. A local hiking guide, seemingly more distressed than I was about my newfound extra knee-lumps, panicked and hit the joint back into place. With over an hour of trekking to go, I walked for about twenty minutes before accepting that it would be quicker for everyone if I let myself be carried. The guides MacGuyver-ed me up a stretcher from bamboo and vines, and I laid back to enjoy the hour-long ride (as best I could while the guides carrying me struggled to keep their own footing in the mud). It was then another hour’s drive to the only hospital on the island, where I was cleaned up, x-rayed, bandaged and given the village zimmer frame to get around on.

If you’re ever in a similar situation, just say no to the zimmer frame. It somehow just makes things even more difficult. Though I did get to live out a retirement dream of shaking it menacingly at some noisy children. 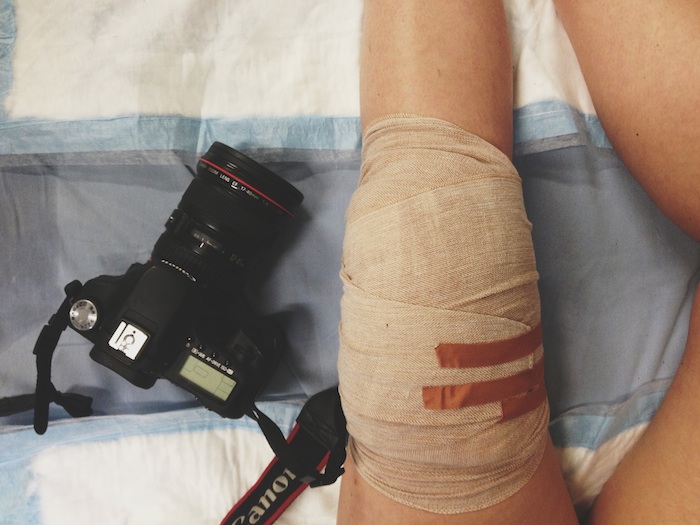 The hotel manager was also nice enough to let me borrow her office chair to wheel myself around.

After around five days of dealing with my insurance company, making our way back to Port Vila, watching dinosaur documentaries in my prescription sunglasses with all the lights on (because of course, my glasses were somehow lost in the jungle along with my dignity), and gorging myself on mysterious Fijian junk food and more grapefruit, we eventually got on a flight home. I headed to the emergency room the next morning, where I was diagnosed with a fracture to the kneecap (missed at the hospital in Vanuatu, and most likely caused by the guide hitting my knee back into place) as well as severe bone bruising and muscular damage. Thankfully, I didn’t need surgery this time, but I did end up in this rather fetching brace for three weeks… 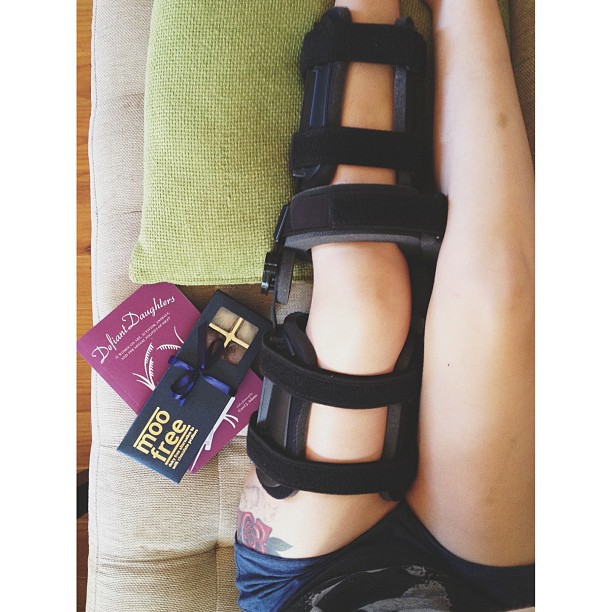 … as well as having to inject myself with daily blood thinners to make up for the admirable amounts of sitting-around-watching-Twin-Peaks-on-Netflix I was doing.

It’s now been eight weeks, and I’m still walking with crutches and visiting a physiotherapist twice a week, but things are looking much better. I’m now able to bend my knee about 90 degrees, can almost straighten it out completely, and I can hobble around the house unassisted and crutch-free. My quad muscle is getting much better and we’re now working on fixing the hamstring (though I think mine needs a more vegan name). I’m still a little disappointed to have cut the trip short and miss the part I’d been most looking forward to- hiking the active volcano, Mt Yasur, on Tanna- but we loved Vanuatu and we’ll definitely be back one day.

So, apologies for the silence on my end! Cooking was limited for a while, and I certainly wasn’t in the mood for a ton of photos. But VeganMoFo is almost upon us and while I don’t think I’m quite up to taking part yet, I’ll be rounding up all of your great posts and hosting giveaways aplenty over on www.veganmofo.com! I’ll also be using the motivation to get back into the swing of things and blogging here more regularly.

Kudos to you if you made it this far and read all that- I owe you some kind of virtual baked treat. Good thing I’m on the mend and can deliver soon! 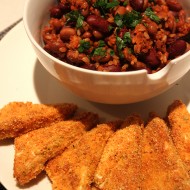 Hey! I just discovered this not-so-new page on your blog, and I LOVE IT! I am a 100% WikoFan. Say hi to Hank S & Pants for me! cool! I love reading about all the creative recipes! Testing is definitely a lot of fun, but it’s a lot of work too – I can see why you... Holy…wow. That dish looks insane! I want that so badly! Was it a very involved recipe? It seems like the kind of dish that would... Wow, those all sound so creative and delicious! that book sounds really great! I love reading about recipes that I could NEVER have even conceived of on my own. Also, shut up, that picture is way more... 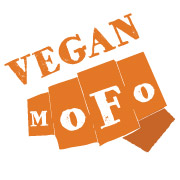